CREAM OF CABARRUS GIRLS BASKETBALL RANKINGS: Vikings are newly minted No. 1 for first time ever 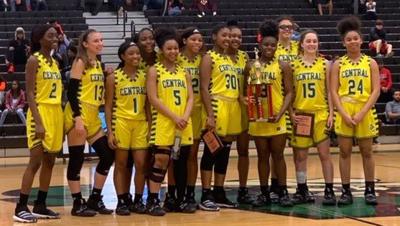 The Central Cabarrus Vikings are the new No. 1 team in the Independent Tribune's Cream of Cabarrus Girls Basketball Rankings.

CONCORD – Here’s a look at this week’s Independent Tribune Cream of Cabarrus Girls Basketball Rankings, a listing of the top six teams in the county:

The Vikings move into the top spot in our rankings for the first time ever after posting a pair of blowouts in the South Piedmont 3A Conference last week – 68-30 over Concord and 54-36 over A.L. Brown. The Vikings have been on a roll lately, having won their last five games, mostly by wide margins. The senior trio of Ja-el’ Miller, Aniyah Tate and Demi Case has been dominant, and there are countless players who can step up and lead the team when called upon. The Vikings have a critical game coming up Friday, though, against the SPC’s other unbeaten (3-0) team, Cox Mill. Get your popcorn ready!

For the first time all season, the Eagles don’t have our rankings’ No. 1 position. Granted, cfa Academy lost to dangerous Asheville Christian, 49-27, last week, but that doesn’t mean the Eagles won’t easily win their conference and make a run for a state championship again, though. So much is still within their grasp. Next up is a home meeting with Gaston Christian on Thursday.

Don’t look now, but after notching back-to-back wins, the Ragin’ Bulls have quietly climbed back to .500, and they’re still very capable of disrupting things in the Southwestern 4A Conference, a league they won with an undefeated record just two seasons ago. They have another chance to better their position in the league standings with a Friday game against third-place Independence.

The Cougars saw both ends of the emotional spectrum last week, losing a heartbreaker to Providence Day in the late seconds last Tuesday and then routing Matthews Covenant Day by 56 points on Friday. Most recently they earned a Tuesday victory over Hickory Grove. They’re the second-place team in the Charlotte Independent Schools Athletic Association, so their championship hopes are not gone.

The Chargers have won their last three games, which have all been against SPC teams and helped them earn a share of the lead in the league standings. One of the biggest games of the season takes place Friday, when the Chargers take on new No. 1 Central Cabarrus, which is the conference’s other unbeaten team. Get there early.

The Trojans have put together a pair of wins to ease back above the .500 mark, and they sit behind only Central Cabarrus and Cox Mill in the SPC standings. On Friday, they travel to struggling Concord (5-12, 0-3).