No. 2 Vikings explode past Wonders to stay in a tie for first in the conference

GIRLS BASKETBALL: No. 2 Vikings explode past Wonders to stay in a tie for first in the conference 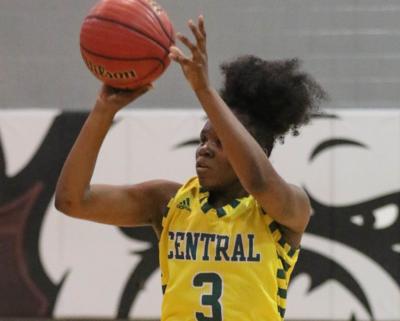 Central Cabarrus guard Ja-el Miller, seen in this file photo, led the way for the Vikings against A.L. Brown.

Joan Moore/Special to The Independent Tribune

KANNAPOLIS – The Central Cabarrus girls basketball team, listed at No. 2 in the Independent Tribune’s Cream of Cabarrus rankings, knew it had business to take care of in order to maintain a first-place tie South Piedmont 3A Conference standings.

That’s exactly what the Vikings did Friday night, as they burst past A.L. Brown, 55-36, at Bullock Gymnasium and earned their fifth win in a row.

The game was never really close, as Central Cabarrus led 20-2 after the first period.

The Vikings are in a tie for first place in the league with No. 5 Cox Mill, which defeated Concord on Friday. Central Cabarrus will play host to the Chargers next Friday in a battle for sole possession of the top spot.