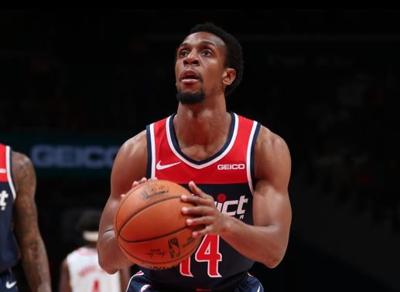 Ish Smith, who graduated from Central Cabarrus High School in 2006, had a perfect offensive stat line while playing for the Washington Wizards Friday night.

It was the game of Ish Smith’s NBA life.

On Friday, the Central Cabarrus graduate played a flawless offensive game, made Washington Wizards history, and nearly helped his team pull off an impressive comeback before it fell to the Toronto Raptors, 122-118, Friday night at Scotiabank Arena.

Smith came off the bench to score a season-high 26 points on 9-for-9 shooting on the reigning NBA champions’ home floor. In addition, Smith was 4-for-4 on his 3-point attempts and made all four of his free throws while never committing a turnover.

The four made 3-pointers were a career-high for the veteran point guard, while the 26 points were just short of his all-time best of 28 scored against the Raptors on Jan. 9, 2016.

According to Wizards pre-game TV host Chris Miller, Smith became the first reserve player in franchise history to go perfect from the field with at least nine field goal attempts since the stat was first recorded during the 1970-71 season.

Washington’s NBC Sports affiliate reported that, before Smith, the best shooting performances for a Wizards bench player were 8-for-8 showings by Mitchell Butler (1994) and Larry Stewart (1993).

The Wizards trailed by 17 points after one quarter, 40-23, and were down by 16 at halftime Friday night. But Washington scrapped back in the second half, and Smith’s floater in the lane tied the game, 109-109, with 3 minutes, 43 seconds remaining.

While he led a Wizards bench unit that outscored its Toronto counterparts 46-26 and knew his individual performance was strong, Smith wasn’t happy with the night’s ultimate result: another loss for a team that currently sits 12th among 15 Eastern Conference teams with an 8-19 record.

“There's no moral victories,” Smith told The Washington Post. “This is something that maybe you think about when you're freakin' 40 years old and you're in the rocking chair with your wife and your kids. But right now, it's turn the page and try to figure out what we can do and how we can get better moving forward with Philly (Saturday night)."

Smith – 6 feet, 175 pounds – graduated from Central Cabarrus in 2006 and was the first player from a Cabarrus County public school to play in an NBA game.

This summer, Smith reached a two-year deal to play with the Wizards, his 11th NBA team. The Athletic and The Washington Post reported that Smith signed a guaranteed two-year deal worth $12 million.