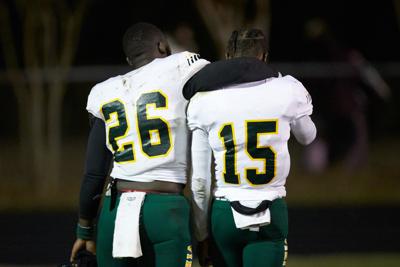 Nate Frazier (26) of the Central Cabarrus Vikings puts his arm around teammate Jay Rodgers-Freeman (15) after a tough loss in overtime to the Mount Tabor Spartans at Bob Sapp Field at Mount Tabor High School on November 15, 2019, in Winston-Salem, North Carolina. The Spartans defeated the Vikings 21-20 in overtime. (Brian Westerholt/Special to the Independent Tribune)

The Vikings (7-5) lost Winston-Salem Mount Tabor, 21-20, in overtime on Friday in a game that played out much like two of their loses to county foes during the regular season.

In both the season-opener against Hickory Ridge and the South Piedmont 3A Conference battle against Northwest Cabarrus, the Vikings built first-half leads, only to allow their opponents to make second-half comebacks and win.

Those came by way of 20 unanswered points to the Bulls and 14 to the Trojans.

On Friday, the Vikings held a 14-0 lead late in the third quarter before Mount Tabor (8-4) scored 14 unanswered points to tie the game and force overtime.

“We had the ball coming out of halftime, and I felt like if we could’ve scored there, the ballgame would’ve been over,” Vikings coach Kenneth McClamrock said. “We had a lot of momentum. We just weren’t able to get back in the end zone.”

Noah Coley (right) of the Central Cabarrus Vikings gets a hug from teammate and brother Devon Coley (left) after the overtime loss to the Mount Tabor Spartans at Bob Sapp Field at Mount Tabor High School on November 15, 2019, in Winston-Salem, North Carolina. The Spartans defeated the Vikings 21-20 in overtime. (Brian Westerholt/Special to the Independent Tribune)

The Vikings didn’t score again until overtime, when star junior DeAndre Boykins rumbled into the end zone to bring the game within a point, 21-20.

Before Friday’s game, Spartans junior running back Brian McIntyre led the run-first team with more than 800 rushing yards. But with the Vikings defense quick to the ball for almost the entirety of three quarters, McIntyre never got the yards he was used to getting.

That is until he broke a 41-yard touchdown late in the third to open Spartan scoring and get the game back within a touchdown.

The Spartans never let the Vikings run away with the game, a mark of a good team. Mount Tabor is a storied program, which just a year ago reached the state semifinals before losing to eventual state champion Weddington.

“I’m so freaking proud of our kids, they played their butts off,” said McClamrock. “Those kids from Mount Tabor played in the final four last year, they lost in the regional finals. That’s a heck of a football team.”

The Vikings had given their all, particularly for the seniors who had played their last football at this level. It was hard to ignore the impact losing this game had on them, but team leaders say they want this feeling of disappointment to remain so that it reminds the returning players to keep working.

“Just remember this feeling and go back to it,” said senior defensive lineman Nate Frazier. “We’ve been in this position too many times.”

Brooks Lawing (right) gets a hug from teammate Aiden Alexander (left) after an overtime loss to the Mount Tabor Spartans at Bob Sapp Field at Mount Tabor High School on November 15, 2019, in Winston-Salem, North Carolina. The Spartans defeated the Vikings 21-20 in overtime. (Brian Westerholt/Special to the Independent Tribune)

Frazier was one of the few Vikings players that didn’t seem as shaken by the outcome, though you could tell it meant a lot to him. He was calm, as if at peace knowing he had played his best game.

He lifted up his teammates, showing leadership with every word and making sure no one hung their heads.

Frazier took a moment with McClamrock after, exchanging words and telling his coach how much he had taught him in their time together.

“I don’t even know,” said Frazier of his calm demeanor. “I feel like this loss is going to hit me hard tomorrow, so I’m just trying to keep my brothers up. This is a family. We play as a family.”

The senior has played well all year, clogging up holes for opposing offensive lines and cheering on his teammates as one of the team’s vocal leaders.

After a night like Friday, he was part of the group McClamrock felt for the most: the seniors. And Frazier had words of encouragement for them after the game as they walked around exchanging brotherly words and hugs.

“The finality, for the seniors, is a tough thing,” McClamrock said. “I want my kids to know that I love them. I want them to know that for the rest of their lives, I’m going to be there for them.”

For the next edition of Central Cabarrus football, guys like Boykins will be asked to step up in even greater roles, ones of leadership.

“(I’ve) got to lead,” said Boykins. “Lead by example and be more of vocal leader like Nate and Brooks (Lawing). Just got to lead.”

As he leads next year, Boykins said he’ll keep those messages to his teammates short and sweet while looking back to moments like Friday.

“Just give everything you’ve got, while you can,” Boykins said, “Because it doesn’t last.”